I have to get this last bit of Christmas Joy out there before the New Year. Well I say Christmas Joy but you will find that my boy Frankie doesn’t quite agree. See I figured since the family was together I would try and get a photo of all of them.I had this idea of getting a picture of them all looking at a certain spot because I have a project that I think a picture like this would be just perfect for. Since I had  my boys Kingston, Frankie and Cooper then their cousins Hannah Irish Setter and Gracie a Gordon Setter then their Aunt Sarah who we think is an Australian Shepard mix the verdict is still out. It would be a perfect opportunity for a fun photo session.I believe the pictures will tell the story of how this played out way better than I can but I will narrate it as best as I can because it was just too funny for words at the time.

Ok, If anyone knows Frankie you know that he can is his own dog and doesn’t always do what you want. Especially in the studio for example I have an older photo I always refer to when ever someone is being stubborn. See before I did the Baby Puggie Project I wanted to test out my set up before the baby’s got here so I was like I will use Frankie.

I had one thing for him to do and that was get in the basket. I didn’t think that was to much to ask just get in the basket. Well he wasn’t having it, no way no how. We tried all kinds of tricks to convince him the basket was the place to be. This was as close to in the basket as we could get him. So it will give you an idea of how the Christmas session went. 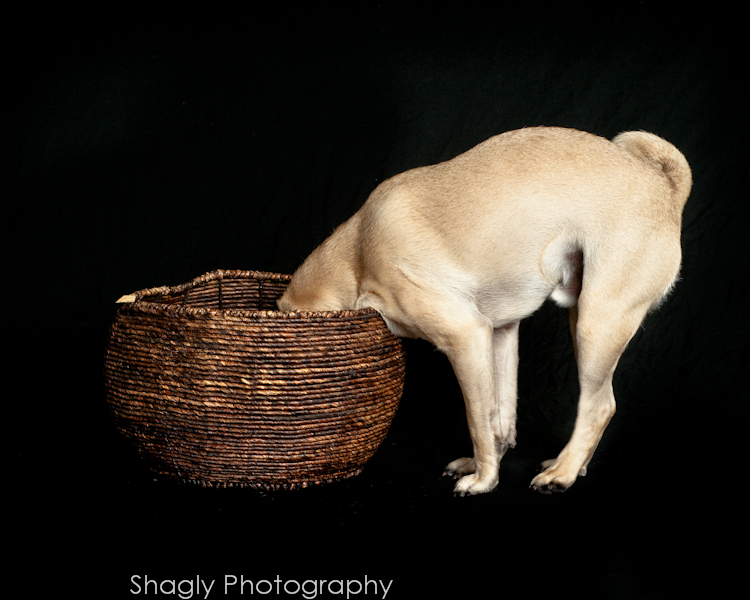 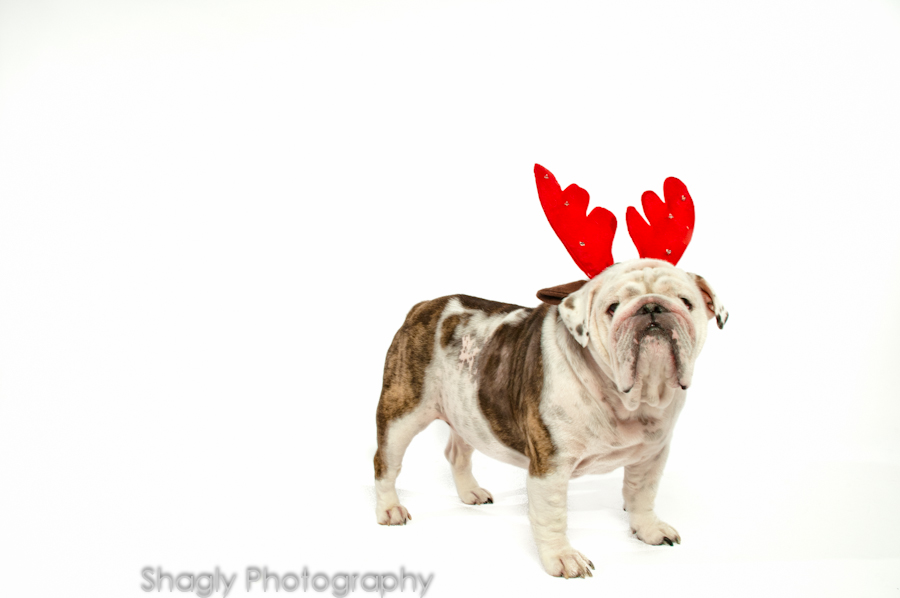 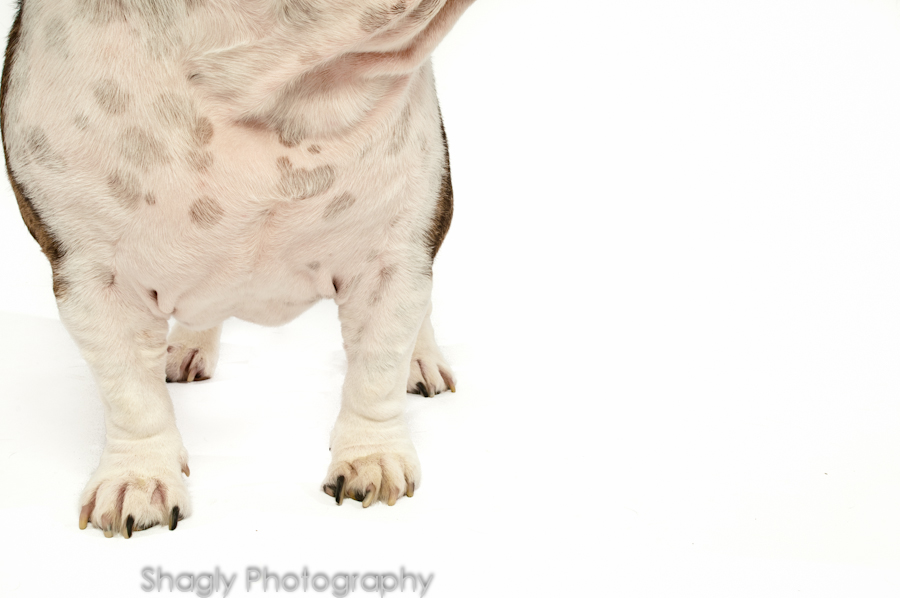 And then it happened as we where getting Frankie ready for his photos. He revolted against Christmas and decided he was going to have no part in the Holiday spirit. Not only that but he was going to put a stop to this whole Christmas shindig. 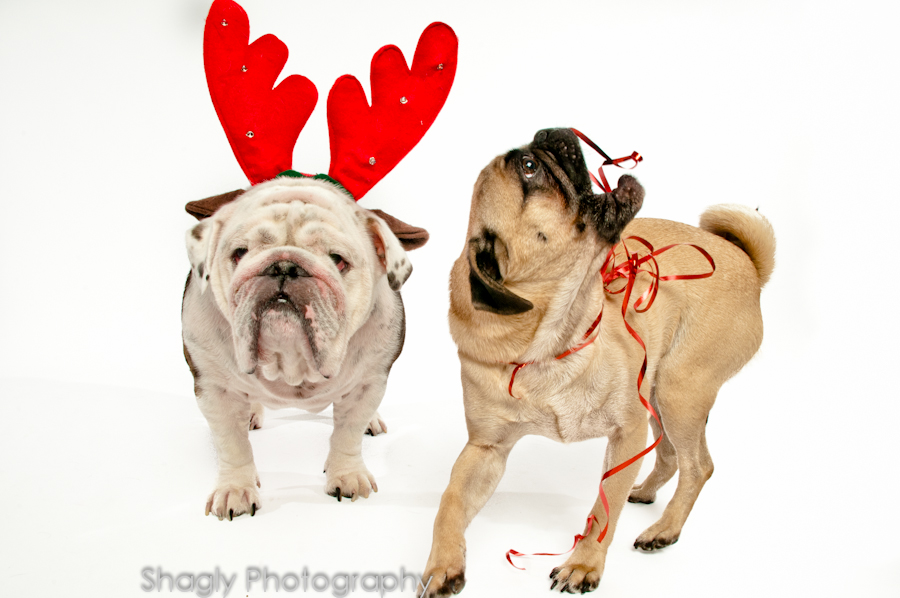 Well after some ridiculousness we got them all settled and started in on Kingston’s photos. Like Cooper Kingston loves to wear cloths he has a his very own dresser full of outfits so this year we decided that the Santa suit was the way to go. Originally we where gonna try to do a whole theme but that didn’t really work out! You know best laid plans. 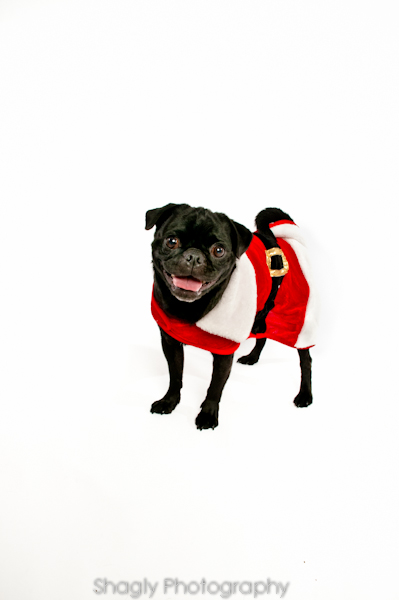 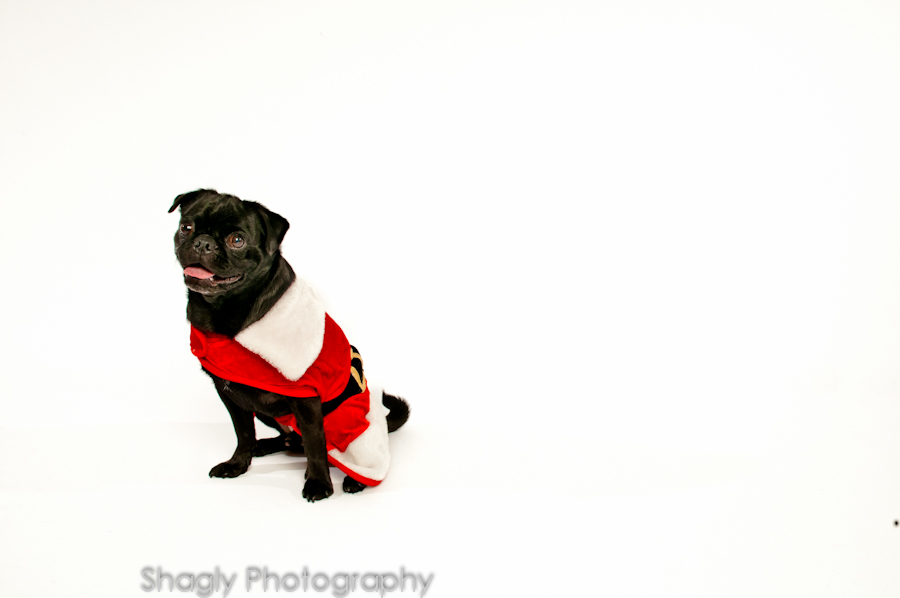 King was really hamming it up for the camera then Frankie wiggled free and put a stop to it his way! 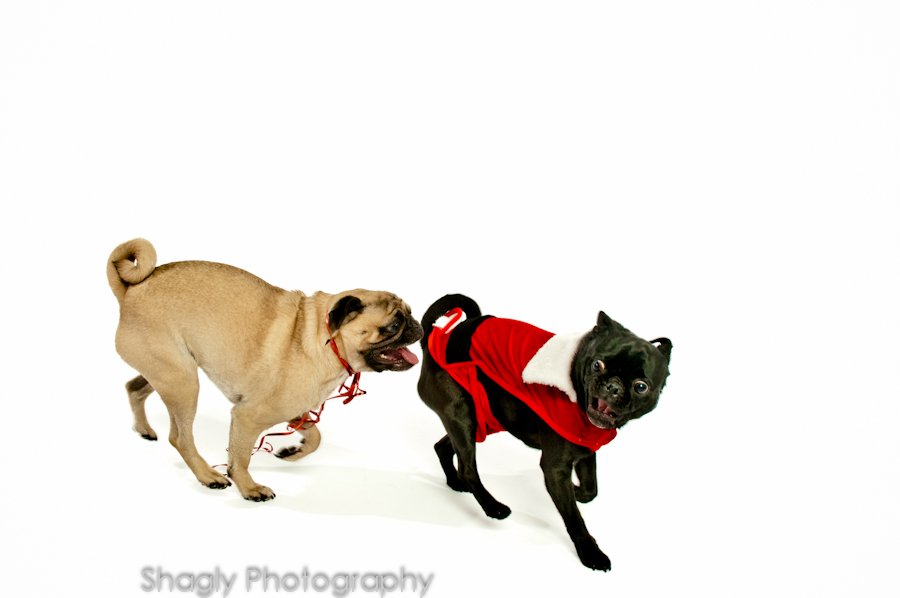 Well after all this we kinda knew how it was going to go with Frankie but at this point it was way to funny to stop. So even with treats and toys Frankie was stubborn to the end! 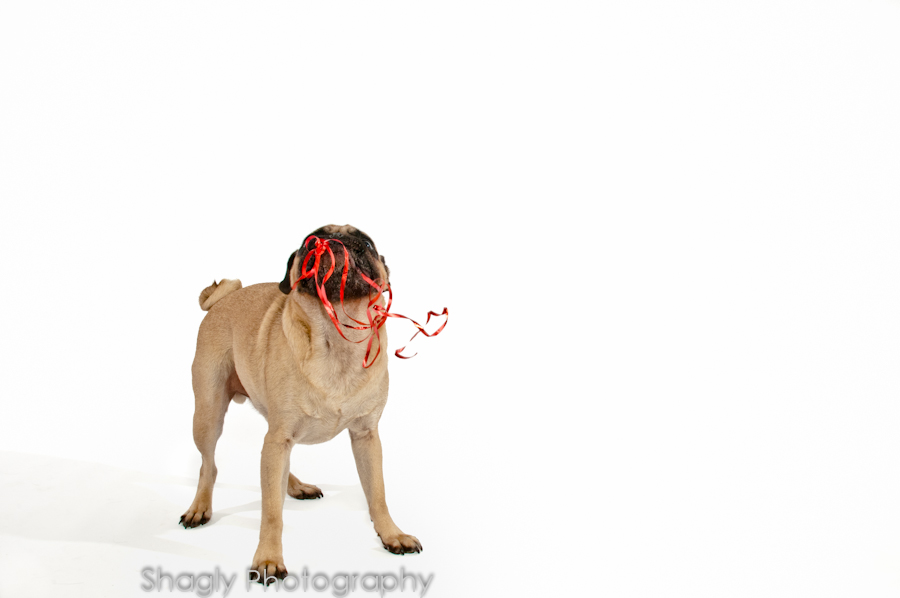 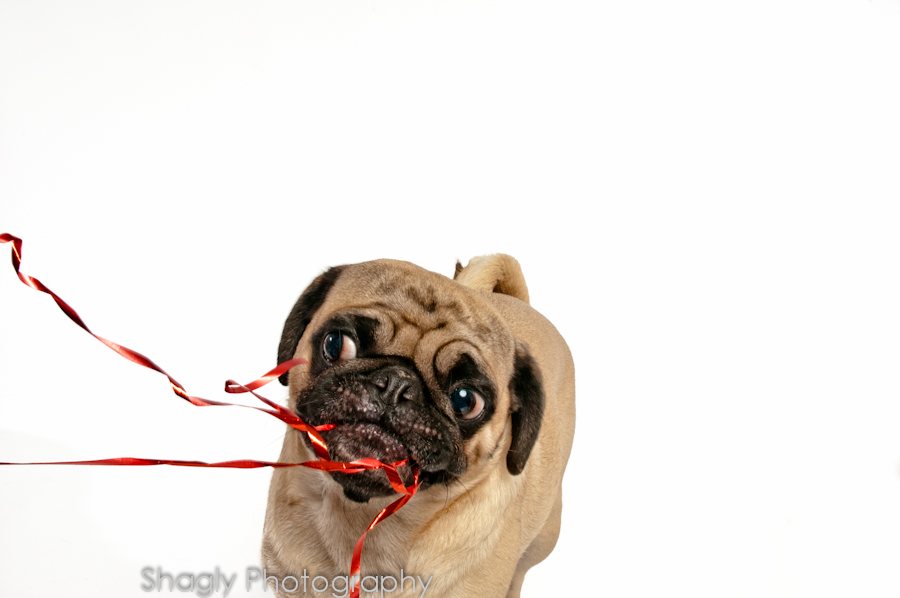 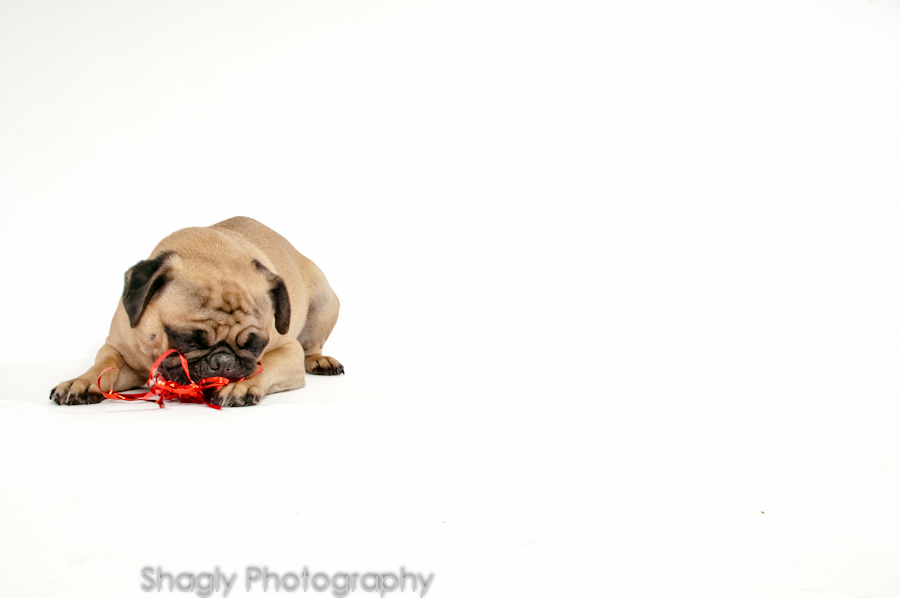 We finally got him to sit still and let us get one photo but he wasn’t happy about it. But really thats just sad face Frank! 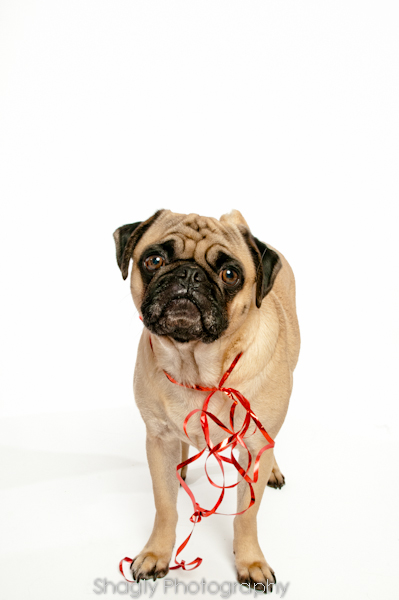 It didn’t last long, after a few seconds of looking as sad as possible it was back to tornado pug. 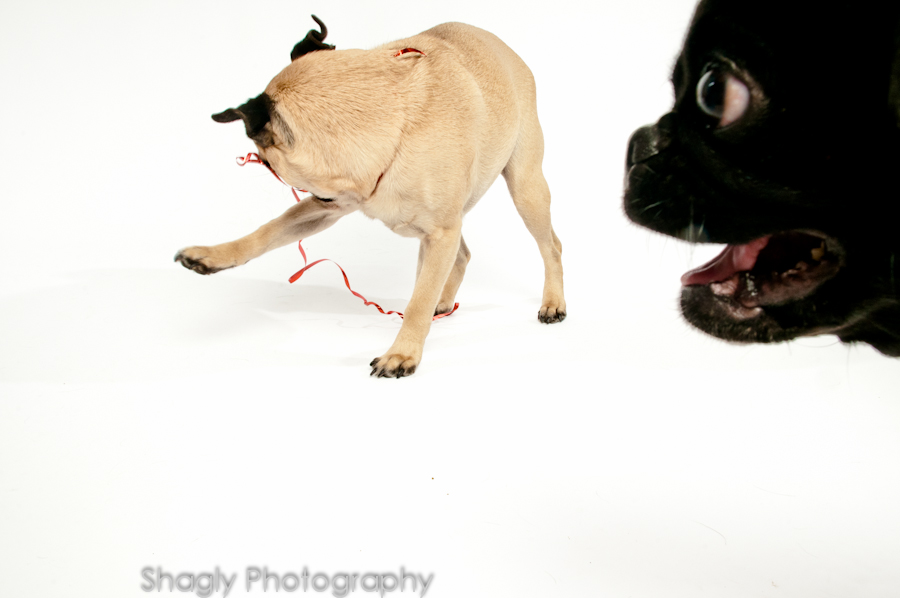 After we caught our breath from laughing at him we took pity on him and took the ribbon off and it was back to Tough Guy for Frankie. 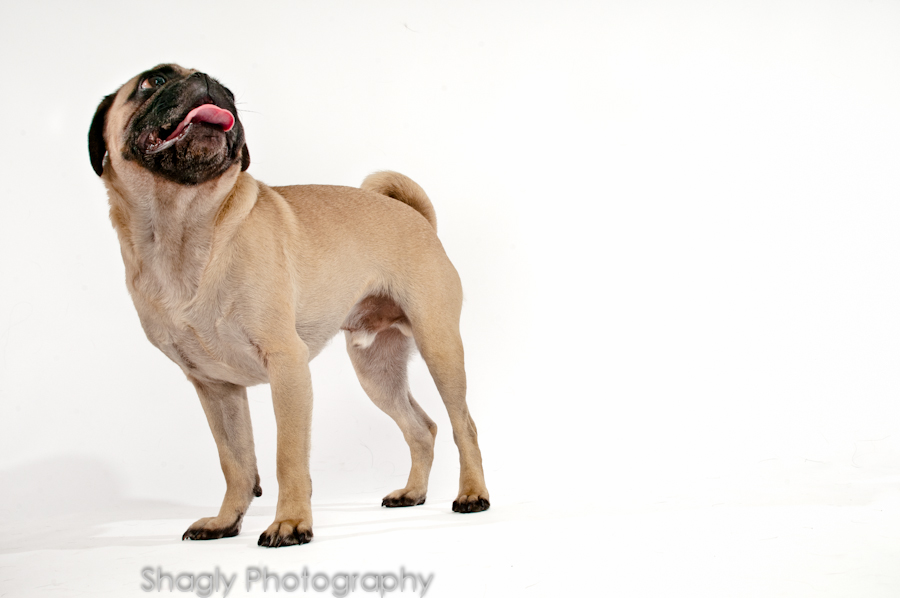 Well after all this we decided we have to at least try for a shot off everyone together which turned out to be just about the funniest thing you have ever seen I wish we had taken a video of it. Its not what I was imagining but it will work perfect for what I want to do with it. Although I didn’t have much expectations going into it as I knew this was going to be a lets put them all in the studio and see what happens! 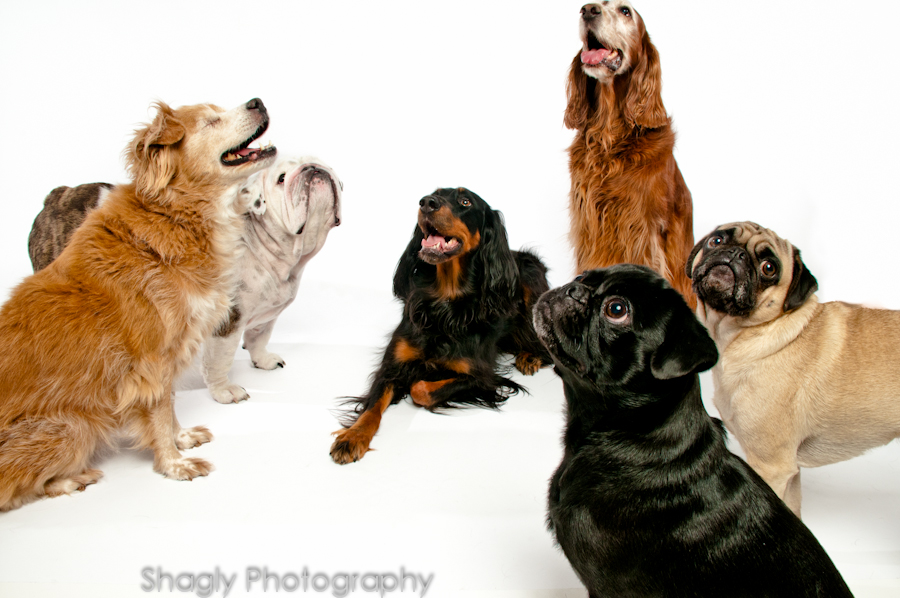 Well I had no idea what I was getting my self into or how it would turn out but it was insanely funny watching Frankie throw his Christmas photo fit. Now that Christmas is over I can say I think Frankie is coming around on this whole Christmas spirit thing but we will have to wait until next year to find out.

I hope everyone had a great Christmas and an Amazing New Year!